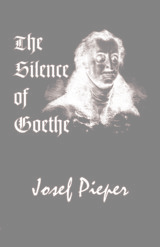 During the last months of the war, Josef Pieper saw the realization of a long-cherished plan to escape from the “lethal chaos” that was the Germany of that time, “plucked,” he writes, “as was Habakkuk, by the hair of his head . . . to be planted into a realm of the most peaceful seclusion, whose borders and exists were, of course, controlled by armed sentries.” There he made contact with a friend close-by, who possessed an amazing library, and Pieper hit upon the idea of reading the letters of Goethe from that library. Soon, however, he decided to read the entire Weimar edition of fifty volumes, which were brought to him in sequence, two or three at a time.
The richness of this life revealing itself over a period of more than sixty years appeared before my gaze in its truly overpowering magnificence, which almost shattered my powers of comprehension – confined, as they had been, to the most immediate and pressing concerns. What a passionate focus on reality in all its forms, what an undying quest to chase down all that is in the world, what strength to affirm life, what ability to take part in it, what vehemence in the way he showed his dedication to it! Of course, too, what ability to limit himself to what was appropriate; what firm control in inhibiting what was purely aimless; what religious respect for the truth of being! I could not overcome my astonishment; and the prisoner entered a world without borders, a world in which the fact of being in prison was of absolutely no significance.
But no matter how many astonishing things I saw in these unforgettable weeks of undisturbed inner focus, nothing was more surprising or unexpected than this: to realize how much of what was peculiar to this life occurred in carefully preserved seclusion; how much the seemingly communicative man who carried on a world-wide correspondence still never wanted to expose in words the core of his existence.
It was precisely in the seclusion, the limitation, the silence of Goethe that made the strongest impact on Pieper. Here was modern Germany’s quintessential conversationalist intellectual, but the strength of his words came from the restraint behind them, even to the point of purposeful forgetting:
The culmination is when the eighty-year-old sees forgetting not as a convulsive refusal to think of things, but as what could almost be termed a physiological process of simple forgetting as a function of life. He praises as “a great gift of the gods” . . . “the ethereal stream of forgetfulness” which he “was always able to value, to use, and to heighten.”
However manifold the forms of this silence and of their unconscious roots and conscious motives may have been, is it not always the possibility of hearing, the possibility of a purer perception of reality that is aimed at? And so, is not Goethe’s type of silence above all the silence of one who listens? . . .
This listening silence is much deeper than the mere refraining from words and speech in human intercourse. It means a stillness, which, like a breath, has penetrated into the inmost chamber of one’s own soul. It is meant, in the Goethean “maxim,” to “deny myself as much as possible and to take up the object into myself as purely as it is possible to do.” . . .
The meaning of being silent is hearing – a hearing in which the simplicity of the receptive gaze at things is like the naturalness, simplicity, and purity of one receiving a confidence, the reality of which is creatura, God’s creation. And insofar as Goethe’s silence is in this sense a hearing silence, to that extent it has the status of the model and paradigm – however much, in individual instances, reservations and criticism are justified. One could remain circumspectly silent about this exemplariness after the heroic nihilism of our age has proclaimed the attitude of the knower to be by no means that of a silent listener but rather as that of self-affirmation over against being: insight and knowledge are naked defiance, the severest endangering of existence in the midst of the superior strength of concrete being. The resistance of knowledge opposes the oppressive superior power. However, that the knower is not a defiant rebel against concrete being, but above all else a listener who stays silent and, on the basis of his silence, a hearer – it is here that Goethe represents what, since Pythagoras, may be considered the silence tradition of the West.
Pieper concludes his remarkable find with this summation:
When such talk, which one encounters absolutely everywhere in workshops and in the marketplace – and as a constant temptation – , when such deafening talk, literally out to thwart listening, is linked to hopelessness, we have to ask is there not in silence – listening silence – necessarily a shred of hope? For who could listen in silence to the language of things if he did not expect something to come of such awareness of the truth? And, in a newly founded discipline of silence, is there not a chance not merely to overcome the sterility of everyday talk but also to overcome its brother, hopelessness – possibly if only to the extent that we know the true face of this relationship? I know that here quite different forces come into play which are beyond human control, and perhaps the circulus has to be broken through in a different place. However, one may ask: could not the “quick, strict resolution” to remain silent at the same time serve as a kind of training in hope?
AUTHOR BIOGRAPHY
Josef Pieper was one of the premier Thomist philosophers of the 20th century. He is the author of innumerable works, including many by St. Augustine's Press, including In Tune with the World, Scholasticism, The Concept of Sin, Enthusiasm and Divine Madness, The Silence of St. Thomas, Death and Immortality, and Happiness and Contemplation.