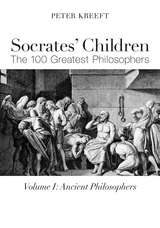 This is the first of a four-volume history of philosophy . . . on ancient, medieval, modern, and contemporary philosophy. After the fourth volume is produced in paper, a one-volume clothbound edition, containing all four paperbound editions, will be published.

Kreeft focuses on the “big ideas” that have influenced present people and present times, and includes relevant biographical data, proportionate to its importance for each thinker. Moreover, the aim of the work is to stimulate philosophizing, controversy, and argument. It uses ordinary language and logic, not jargon and symbolic logic, and it is commonsensical (like Aristotle) and existential in the sense that it sees philosophy as something to be lived and experienced in life. Philosophy, after all, is not about philosophy but reality . . . about wisdom, life and death, good and evil, and God.

Kreeft seeks to be simple and direct and clear. But it is not dumbed down and patronizing. It will stretch the reader, but it is meant for beginners, not just scholars. It can be used for college classes or do-it-yourselfers. It emphasizes surprises; remember, “philosophy begins in wonder.” And it includes visual aids: charts, cartoons, line drawings, and drawings of each philosopher.

Peter Kreeft teaches philosophy at Boston College and is the author of scores of books in philosophy and religion, among them, from St. Augustine's Press: An Ocean Full of Angels, Socratic Logic, The Philosophy of Jesus, Jesus-Shock, The Sea Within, I Surf Therefore I Am, If Einstein Had Been a Surfer, and Summa Philosophica.