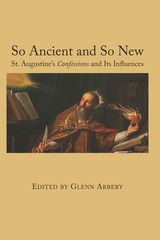 So Ancient and So New: St. Augustine's Confessions and Its Influence
edited by Glenn Arbery
St. Augustine's Press, 2016
Paper: 978-1-58731-819-1
The study of any masterpiece can change one’s life, but the Confessions of St. Augustine, like Plato’s Republic or Dante’s Commedia, has the almost uncanny power to enact in the reader what it describes. Plato’s book reconfigures the city of the soul by freeing it from enslavement to the tyrannical passions and making it answerable to reason in its pursuit of the good. For Augustine, who shares many of the same ends, the pursuit of the good is not the rectification of philosophical reason, but (as it was for Dante) an intensely personal and consuming love: the encounter with the living God. Oddly, it may seem, that encounter comes for Augustine through the act of reading. Unlike Plato, who depicts the process of reasoning toward the truth, Augustine finds the truth revealed in another, immeasurably greater book that cannot be read in its true sense without the help of its author.

The essays uncover a variety of themes, from Augustine’s act of reading (Marc LePain and Bercier), his emphasis on memory (Roger Corriveau), and his choice to reveal to the world his “hidden and unworldly activity” (Daniel Maher), to the way Augustine’s own education might serve as a corrective to contemporary understandings of “assessment” (Gavin Colvert). The vast wake of Augustine’s work includes writers from Dante and Montaigne to Nabokov, but three representative figures were chosen to show his influence: Jean-Jacques Rousseau in the Confessions (Rick Sorenson), James Joyce in the whole range of his work (Eloise Knowlton), and T.S. Eliot in the Four Quartets (Glenn Arbery). The most direct engagement with Augustine is obviously Rousseau’s. In his essay comparing and contrasting the pivotal moments of the two Confessions, Rick Sorenson explores major differences between the way of faith and the path of reliance on reason. Joyce might be said to have taken Rousseau’s path (at least in rejecting revelation), whereas Eliot took Augustine’s.

In its sophistications and anxieties, the late antiquity Augustine inhabited feels a great deal like the late modernity we inhabit now. Certainly, the barbarians of materialist thought long ago sacked the civilization our ancestors inhabited. When Eliot published The Waste Land in 1922, he already saw the old order of antiquity and Christendom as “stony rubble,” “a heap of broken images.” As one of his speakers puts it, “Dry bones can harm no one.” This old book, the Confessions, might seem to our contemporaries as dry and dead as those bones, but it is not so.

Without being a defense of Christianity (as the City of God is) or a work of catechesis, the Confessions might be the greatest counter to the materialist creed in Western literature. It recounts Augustine’s central, intensely personal, and ultimately liberating struggle to conceive of spiritual substance, an intellectual achievement without which he cannot even hope to accommodate his understanding to the reality of God. This book of essays has one primary end, which is to entice the reader to reopen Augustine’s book, to look over his shoulder and see what the act of reading means to him and what it has accomplished: the world-changing encounter with the substance of the Word.