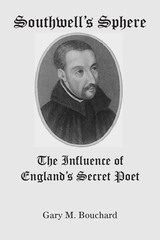 Once feared by Queen Elizabeth I and admired by William Shakespeare, Robert Southwell, s.j. (1561–1595), clings today to a thinning canonical presence in English literature among a sphere of other writers incongruously called the metaphysical poets. Southwell’s Sphere lifts this sixteenth century Jesuit priest and prolific writer from the obscurity in which he too often resides and places him instead at the center of a sphere of English poets upon whom his life and works exerted an observable influence. As he weaved his religious content into the familiar loom of Elizabethan form and style, this young missionary priest was seeking not just to catechize those whom he regarded as the faithful and the fallen, but to intentionally reform the verse of his native England. Remarkably, during his brief six-year mission, he actually managed in many respects to do so. Surviving for six years by successfully navigating and fostering a complicated underground Catholic network in and around London before being captured, tortured and imprisoned, Southwell was brought to trial and executed at Tyburn at age 33. He therefore never knew most of the “skillfuller wits” that he called upon to direct their poetic skills to the service of God. And like the marks upon his tortured body, the poetic marks of influence that his work left upon individual writers of this era were in many cases deliberately concealed. Southwell’s Sphere seeks to rediscover those marks and offer the reader a renewed appreciation for this subverted and subverting literary force in Early Modern England. In individual explicative chapters this book examines works by six poets whose verse may be appreciated differently in light of Robert Southwell’s life and work. The author makes the case that Southwell’s works, posthumously and prolifically published, instructed William Alabaster, provoked Edmund Spenser, prompted George Herbert, haunted John Donne, inspired Richard Crashaw and — two and a half centuries later — consoled Gerard Manley Hopkins, s.j. With the exception of Spenser, all of these poets were, like Southwell, ordained ministers. The particular personal, political and religious complexities of each of their lives notwithstanding, what they most shared in common with Southwell was their priestly vocation, their talent as English poets and the inevitable and inextricable joining of these two activities in their lives. While it would have made little sense for any of these poets to acknowledge Southwell as a poetic peer, each of them authored important verse that can best be appreciated within the sphere of this improbably successful and influential English poet.
TABLE OF CONTENTS
Table of Contents
Introduction
Chapter 1 - Southwell’s Miscellany: Reforming the English Poetic
Chapter 2 - The Sphere’s First Tears: The Wits, Alabaster, and Drayton
Chapter 3 - Southwell’s Clout: Reforming Edmund Spenser?
Chapter 4 - Poetic Pheres: Southwell and George Herbert
Chapter 5 - A Meditation of Martyrdom: Southwell and John Donne
Chapter 6 - The Sphere’s Last Tears: Southwell and Richard Crawshaw
Chapter 7 - The Dust of Dead Supplies: Southwell and Gerard Manley Hopkins
Afterword - What Remains When Disbelief Is Gone
Bibliography
Index