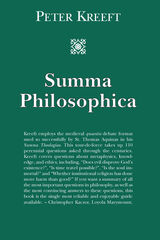 Next to the Socratic Method, the best method for organizing a logical debate over a controversial philosophical or theological issue is the method St. Thomas Aquinas uses in the Summa Theologiae. As the charm of the Socratic dialogue is its dramatic length, its uncertainty, and the psychological dimension of a clash between live characters, so the charm of the Summa method is the opposite: its condensation and its impersonality, objectivity, simplicity, directness, and logical clarity. Beginning philosophy students pick up both methods very quickly, and write adept imitations of them. It’s both profitable and fun to do it.    Yet professionally philosophers have not followed these tried-and-true roads. Why not? Probably it is pride, the refusal to stoop to conquer, the confusion of “stooped” with “stupid.”

Peter Kreeft has written over a dozen books of Socratic dialogues, and readers like them – they like the form, or format, irrespective of the content. There is no reason that the Summa format cannot produce the same results. It is a very simple five-step procedure: (1) the formulation of the question; (2) the opponent’s leading objections to your answer or thesis, formulated as clearly and fairly and strongly as possible; (3) a short argument from some recognized past authority for your thesis; (4) your own longer, original argument; and (5) a refutation of each objection, “deconstructing” it and showing how and where it went wrong . . . all in one or two pages, severely condensed, clear and simple (and therefore usually in syllogisms, the clearest and simplest and most direct form of logical argument).

Kreeft has taken 110 of the most important and most often argued-about questions in each major division of philosophy and applied this method to it. The answers usually match common sense (and therefore Aristotle’s philosophy and Aquinas’s theology). At the very least, this is a useful philosophical reference book for arguments; not necessarily the elaborate and artificial arguments that might occur to contemporary “analytic” philosophers, but the arguments ordinary people would give, and still give on both sides of these great questions. Why no one has written such a book before is mind-boggling. We fully expect that many readers of this book will imitate it, as Kreeft has imitated Aquinas. This book is pregnant with many children.

Peter Kreeft likes to argue. He has been Professor of Philosophy at Boston College for over 45 years, and has written over 60 books in philosophy and theology, including Socratic Logic, the only complete Aristotelian (common-sense, ordinary-language) logic textbook in print; Summa of the Summa and A Shorter Summa on St. Thomas’s Summa Theologiae; and many Socratic dialogues in which Socrates meets Jesus, Machiavelli, Marx, Sartre, Descartes, Hume, and Kant. All of them can be understood by non-philosophers as well as philosophers; that is why he is not a famous philosopher.