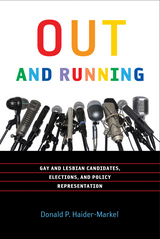 Out and Running is the first systematic analysis of lesbian, gay, bisexual, and transgender (LGBT) political representation that explores the dynamics of state legislative campaigns and the influence of lesbian and gay legislators in the state policymaking process. By examining state legislative elections from 1992 to 2006 and state policymaking from 1992 to 2009, Donald Haider-Markel suggests that the LGBT community can overcome hurdles and win elections; and, once in office, these officials can play a critical role in the policy representation of the community.

However, he also discovers that there are limits to where and when LGBT candidates can run for office and that, while their presence in office often enhances policy representation, it can also create backlash. But even with some of these negative consequences, Out and Running provides compelling evidence that gays and lesbians are more likely to see beneficial legislation pass by increasing the number of LGBT state legislators. Indeed, grassroots politics in the states may allow the LGBT community its best opportunity for achieving its policy goals.

Donald P. Haider-Markel is a professor of political science at the University of Kansas. He is editor of the Political Encyclopedia of U.S. States and Regions and coauthor of Gay and Lesbian Americans and Political Participation.


-- Paul R. Brewer, University of Wisconsin-Milwaukee and author of Value War: Public Opinion and the Politics of Gay Rights


-- Craig A. Rimmerman, The Joseph P. DiGangi Endowed Chair in the Social Sciences and professor of public policy and political science, Hobart and William Smith Colleges

1. Political Representation and a Brief History of the American LGBT Movement

2. See How they Run: Voter Preferences and Candidates' Experiences with the Role of Sexual Orientation in State Elections

4.In the Legislature: Case Studies on Political Representation and LGBT State Legislators

7. Conclusion: Out for Good