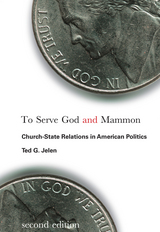 Newly revised and updated, To Serve God and Mammon is a classic in the field of religion and politics that provides an unbiased introduction and overview of church–state relations in the United States.

Jelen begins by exploring the inherent tension between the Establishment and Free Exercise clauses of the First Amendment. He then examines how different actors in American politics (e.g., the courts, Congress, the president, ordinary citizens) have different and conflicting values that affect their attitudes and actions toward the relationship between the sacred and the secular. Finally, he discusses how the fragmented nature of political authority in the United States provides the basis for continuing conflict concerning church–state relations.

This second edition includes analyses of various recent court cases and the implications of living in the post–9/11 era. It also features discussion questions at the end of each chapter, a glossary of terms, and synopses of selected court decisions bearing on religion and politics in the United States.

Ted G. Jelen is a professor of political science at the University of Nevada, Las Vegas. He is currently the coeditor of the journal Politics and Religion, and the former editor of the Journal for the Scientific Study of Religion.

2. The Uses of History

4. From Christian America to Free ExerciseThe Changing Nature of Church-State Relations5. The Future of the Church-State Debate