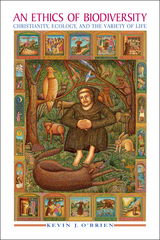 Life on earth is wildly diverse, but the future of that diversity is now in question. Through environmentally destructive farming practices, ever-expanding energy use, and the development and homogenization of land, human beings are responsible for unprecedented reductions in the variety of life forms around us. Estimates suggest that species extinctions caused by humans occur at up to 1,000 times the natural rate, and that one of every twenty species on the planet could be eradicated by 2060.

An Ethics of Biodiversity argues that these facts should inspire careful reflection and action in Christian churches, which must learn from earth’s vast diversity in order to help conserve the natural and social diversity of our planet. Bringing scientific data into conversation with theological tradition, the book shows that biodiversity is a point of intersection between faith and ethics, social justice and environmentalism, science and politics, global problems and local solutions. An Ethics of Biodiversity offers a set of tools for students, environmentalists, and people of faith to think critically about how human beings can live with and as part of the variety of life in God’s creation.

1. The Variety of Life

3. The Sacramental Value of the Variety of Life

Part III: The Levels of Biodiversity

Part V: Social Justice and the Conservation of Biodiversity

Conclusion: The Work of Conserving Biodiversity