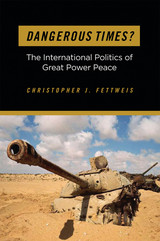 What horrors will the twenty-first century bring? For many people, a clash of civilizations and a perilous return to great power rivalries are the dominant visions of things to come. Fueled by daily headlines, overwhelming majorities of people from all walks of life consider the world to be a far more chaotic, frightening, and ultimately more dangerous place than ever before. Christopher J. Fettweis argues that these impressions, however widespread, are wrong.

Dangerous Times? is an examination of international politics that reveals both theoretical logic and empirical data that support the vision of a future where wars between great powers are unlikely and transnational threats can be contained. Despite popular perception, today a far greater percentage of the world’s population lives in peace than at any time in history, and the number and intensity of all types of warfare have dropped steadily since the early 1990s. Terrorism, though reprehensible, can be combated and can actually increase international cooperation among states fighting a common threat. World wars like those of the twentieth century—the true clash of civilizations—are unlikely to be repeated in the close-knit world of the twenty-first century.

In this sharp and insightful book, Fettweis discusses this revolution in human history and its ramifications for international relations theory. He suggests a new vision for a more restrained U.S. grand strategy and foreign policy and reveals how, despite pessimistic perceptions to the contrary, the world is more likely entering a golden age of peace and security.

Christopher J. Fettweis is an assistant professor of political science at Tulane University. He is the author of Losing Hurts Twice as Bad: The Four Stages to Moving Beyond Iraq.


Introduction: Anxiety, Danger and the Ghost of Norman Angell

2. From Opium to Obsolescence: The Norms of War