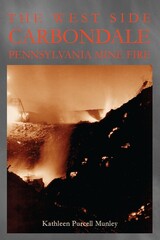 In early 1947 residents of the west side of Carbondale, Pennsylvania began noticing a peculiar steam escaping from the ground. An investigation into this phenomenon revealed that Carbondale was slowly but steadily being destroyed by a burning inferno deep below its surface—a fire raging through the deserted anthracite coal mine shafts that twisted and turned beneath that part of the city. After several years of attempting to contain the fire by flushing, municipal leaders decided that the only sure way of eliminating the threat to the community was by digging it out. To eradicate the burning menace, hundreds of homes and buildings were purchased and destroyed, and what was once a vibrant neighborhood became an abandoned wasteland.

Historian Kathleen Purcell Munley narrates here the story of this great fire, identifying its source, tracing its history, and, through personal interviews with former Carbondale residents, reveals its physical and psychological toll. The mine fire destroyed the West Side as it was, but this volume will keep its memory alive and preserve an important chapter in the history of Carbondale and Pennsylvania.

Kathleen Purcell Munley is professor of history at Marywood University.