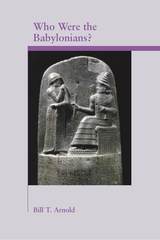 This engaging and informative introduction to the the Babylonians were important not only because of their many historical contacts with ancient Israel but because they and their predecessors, the Sumerians, established the philosophical and social infrastructure for most of Western Asia for nearly two millennia. Beginning and advanced students as well as biblical scholars and interested nonspecialists will read this introduction to the history and culture of the Babylonians with interest and profit.
AUTHOR BIOGRAPHY
Bill T. Arnold is the Paul S. Amos Professor of Old Testament Interpretation. He joined Asbury Theological Seminary faculty in 1995. He has written or edited twelve books, including most recently Introduction to the Old Testament (2014)
TABLE OF CONTENTS