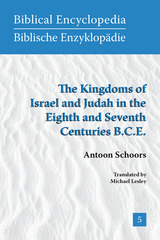 The period of Assyrian domination over Israel and Judah (ca. 750–650 B.C.E.) can be reconstructed with reasonable accuracy. For example, both biblical and extrabiblical records indicate that the northern kingdom (Israel) came to an end in 722 with the fall of Samaria, while several decades later Jerusalem, capital of the southern kingdom (Judah), narrowly escaped being taken by Sennacherib. The first half of the seventh century was dominated by Manasseh in Judah, who not only served his overlords the Assyrians but also practiced a bloody form of despotism. With regard to biblical literature, the eighth century was the period of Israel’s first great literary prophets: Amos, Hosea, Isaiah, and Micah. Other important texts, such as the Book of the Covenant, the early stories about the kings, the early forms of the patriarchal narratives in Genesis, and collections of proverbs, were either created or underwent profound editorial shaping during this time. This volume surveys the history of this formative period and presents a critical study of the biblical literature that originated within this historical context, as well as theological conclusions that readers may draw from these texts.
TABLE OF CONTENTS
Contents
Foreword
Timeline
Abbreviations
Map: Palestine in the Iron Age
Acknowledgments for Figures
I. The Biblical Depiction of the Period
II. The History of the Era
III. The Literature of the Era
IV. The Theological Significance of the Era
Index of Names
Index of Authors
Index of Subjects
Index of Biblical References