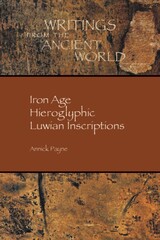 Hieroglyphic Luwian belongs to the Anatolian group of ancient languages and was inscribed primarily on stone, using an indigenous Anatolian pictorial writing system. These Hieroglyphic Luwian inscriptions were written over a period of centuries in the region of Anatolia and northern Syria. Their authors were primarily the rulers of the so-called Neo-Hittite states, contemporaries and neighbors of early Israel. This volume collects some of the most important and representative of the inscriptions in transliteration and translation, organized by genre. Each text is accompanied by relevant information on provenance, dating, and other points of interest that will engage specialist and nonspecialist alike.
AUTHOR BIOGRAPHY
Annick Payne has taught courses on ancient Anatolian languages at Freie Universität Berlin and Julius-Maximilians-Universität Würzburg. She is the author of Hieroglyphic Luwian: An Introduction with Original Texts (Harrassowitz, 2010).
REVIEWS

"Written by an established scholar in the field of
Hittite hieroglyphic texts, this useful book gives
brief introductions, transliterations and translations
to the main inscriptions found on various
sites in modern Turkey, Syria and Iraq. ...The book will surely be heartily welcomed by
teachers and students."