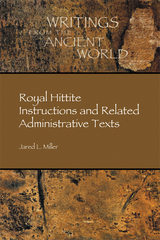 Few compositions provide as much insight into the structure of the Hittite state and the nature of Hittite society as the so-called Instructions. While these texts may strike the modern reader as didactic, the Hittites, who categorized them together with state treaties, understood them as “contracts” or “obligations,” consisting of the king’s instructions to officials such as priests and temple personnel, mayors, military officers, border garrison commanders, and palace servants. They detail how and in what spirit the officials are to carry out their duties and what consequences they are to suffer for failure. Also included are several examples of closely related oath impositions and oaths. Collecting for the first time the entire corpus of Hittite Instructions, this accessible volume presents these works in transliteration of the original texts and translation, with clear and readable introductory essays, references to primary and secondary sources, and thorough indices.
AUTHOR BIOGRAPHY
Jared L. Miller is Professor of Ancient Near Eastern Studies at Ludwig-Maximilians-Universität in Munich. He is the author of Studies in the Origins, Development and Interpretation of the Kizzuwatna Rituals and the co-editor of Pax Hethitica: Studies on the Hittites and Their Neighbours in Honour of Itamar Singer (both from Harrassowitz).
TABLE OF CONTENTS
Contents
Series Editor’s Foreword
Acknowledgments
Notes on Transliterations
Signs and Conventions
Abbreviations
Introduction
Chapter 1: Old Kingdom Sources
Chapter 2: Sources from the Reigns of Tudḫaliya I and Arnuwanda I
Chapter 3: Empire Period Sources
Sources
Notes
References
Index