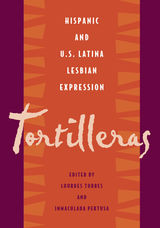 The first anthology to focus exclusively on queer readings of Spanish, Latin American, and US Latina lesbian literature and culture, Tortilleras interrogates issues of gender, national identity, race, ethnicity, and class to show the impossibility of projecting a singular Hispanic or Latina Lesbian. Examining carefully the works of a range of lesbian writers and performance artists, including Carmelita Tropicana and Christina Peri Rossi, among others, the contributors create a picture of the complicated and multi-textured contributions of Latina and Hispanic lesbians to literature and culture. More than simply describing this sphere of creativity, the contributors also recover from history the long, veiled existence of this world, exposing its roots, its impact on lesbian culture, and, making the power of lesbian performance and literature visible.
AUTHOR BIOGRAPHY
Lourdes Torres is Associate Professor of Latin American/Latino studies at De Paul University.Inmaculada Perpetusa-Seva is Assistant Professor of Spanish at the University of Kentucky.Contributors: María Claudia André, Janis Breckenridge, Regina M. Buccola, Karina Lisette Cespedes, Sara E. Cooper, Catrióna Rueda Esquibel, Salvador C. Fernández, Elisa A. Garza; Wilfredo Hernández, Lawrence La Fountain-Stokes, Gema Pérez-Sánchez, Christina Sharpe, Sherry Velasco, Nancy Vosburg, and the editors.
TABLE OF CONTENTS