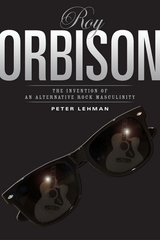 Roy Orbison's music—whether heard in his own recordings or in cover versions of his songs—is a significant part of contemporary American culture despite the fact that he died almost a generation ago. Few of today's listeners know or remember how startlingly unique he seemed at the height of his career in the early 1960s. In this book, Peter Lehman looks at the long span of Orbison's career and probes into the uniqueness of his songs, singing, and performance style, arguing that singer/songwriters no less than filmmakers can be considered as auteurs.Unlike other pop stars, Orbison was a constant presence on the Top 40, but virtually invisible in the media during his heyday. Ignoring the conventions of pop music, he wrote complex songs and sang them with a startling vocal range and power. Wearing black clothes and glasses and standing motionless on stage, he rejected the macho self confidence and strutting that characterized the male rockers of his time. He sang about a man lost in a world of loneliness and fear, one who cried in the dark or escaped into a dream world, the only place his desires could be fulfilled. This was a man who reveled in passivity, pain, and loss.Lehman traces Orbison's development of this alternative masculinity and the use of his music in films by Wim Wenders and David Lynch. Widely admired by fellow musicians from Elvis to Jagger, Springsteen and Bono, Orbison still attracts new listeners. As a devoted fan and insightful scholar, Lehman gives us a fascinating account of "the greatest white singer on the planet," and a new approach to understanding individual singer/songwriters.
AUTHOR BIOGRAPHY
Peter Lehman is Director of the Interdisciplinary Humanities Program at Arizona State University. He is the author of Running Scared: Masculinity and the Representation of the Male Body (Temple), and the editor of Masculinity Bodies/Movies/Culture.
TABLE OF CONTENTS


Acknowledgments1. There Are Many Roy Orbisons2. Mystery Man: The Evolution of a Dark, Mysterious Persona3. "Radical Left Turns": The Voice and the Music4. In (and Out of) Dreams5. "Crawling Back": The Masochist Aesthetic6. In David Lynch's Dreams: Roy Orbison at the Movies7. "The Finest White Pop Singer on the Planet": "Oh, Pretty Woman," 2 Live Crew, and Discourses of Race8. Beyond the End: Roy Orbison's Posthumous Career and LegacyAppendix: Analysis of Songs and RecordingsNotesWorks CitedSong AcknowledgmentsIndex