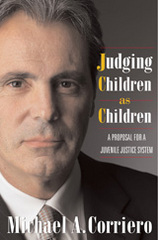 At a time when America's court system increasingly tries juvenile offenders as adults, Michael Corriero draws directly from his experience as the founding judge of a special juvenile court to propose a new approach to dealing with youthful offenders.

Since 1992, Judge Corriero has presided over the Manhattan Youth Part, a New York City court specifically designed to discipline teenage offenders. Its guiding principles, clearly laid out in this book, are that children are developmentally different from adults and that a judge can be a formidable force in shaping the lives of children who appear in court.

Judging Children as Children makes a compelling argument for a better system of justice that recognizes the mental, emotional, and physical abilities of young people and provides them with an opportunity to be rehabilitated as productive members of society instead of being locked up in prisons.

AUTHOR BIOGRAPHY
Michael A. Corriero is a Judge of the New York State Court of Claims, and he sits by designation in New York City's Supreme Court and is the Presiding Judge of Manhattan's Youth Part.
TABLE OF CONTENTS