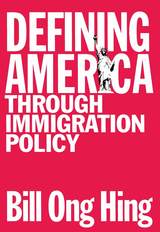 From the earliest days of nationhood, the United States has determined who might enter the country and who might be naturalized. In this sweeping review of US immigration policies, Bill Ong Hing points to the racial, ethnic, and social struggles over who should be welcomed into the community of citizens. He shows how shifting visions of America have shaped policies governing asylum, exclusion, amnesty, and border policing. Written for a broad audience, Defining America Through Immigration Policy sets the continuing debates about immigration in the context of what value we as a people have assigned to cultural pluralism in various eras. Hing examines the competing visions of America reflected in immigration debates over the last 225 years. For instance, he compares the rationales and regulations that limited immigration of southern and eastern Europeans to those that excluded Asians in the nineteenth century. He offers a detailed history of the policies and enforcement procedures put in place to limit migration from Mexico, and indicts current border control measures as immoral. He probes into little discussed issues such as the exclusion of gays and lesbians and the impact of political considerations on the availability of amnesty and asylum to various groups of migrants. Hing's spirited discussion and sophisticated analysis will appeal to readers in a wide spectrum of academic disciplines as well as those general readers interested in America's on-going attempts to make one of many.
AUTHOR BIOGRAPHY
Bill Ong Hing is Professor of Law and Asian American Studies at the University of California, Davis. His previous books include To Be an American: Cultural Pluralism and the Rhetoric of Assimilation and Making and Remaking America through Immigration Policy.
TABLE OF CONTENTS


ForewordIntroductionPart I. Defining America1. The Western European New World and The New Americans2. The Undesirable Asian3. "Translate This": The 1917 Literacy Law4. The Xenophobic 1920sPart II. Redefining America5. The 1952 Act: Excluding Communists, Homosexuals, and Other Undesirables6. 1965 to 1990: From Discriminatory Quotas to Discriminatory Diversity VisasPart III. Defining Mexicans As Non-Americans7. Politicizing the Southwest Border8. Patrolling the Border and Sweeping for Mexicans9. Irca: Penalizing Employers, as Amnesty Barely Survives10. The Dark Side of Modern-Day Enforcement: Operation GatekeeperPart IV. Deporting and Barring Non-Americans11. Removal12. The Politics of AsylumEpilogue: Two AmericasAppendixNotesIndex