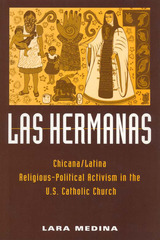 In this historical study, Lara Medina examines the early development and continuing influence of Las Hermanas, a feminist organization established in 1971 to counter the patriarchy and Eurocentrism of the U.S. Catholic Church.Lara Medina weaves archival research and oral interviews into a cohesive narrative that highlights the keen ethnic and political awareness among the movement's leaders and participants. Medina also illuminates the strides made by Las Hermanas in undermining and reorienting the male-dominated structure of both the Catholic ministry and the Chicano civil rights movement.By showing how the group has engaged such issues as moral authority, sexuality, and domestic abuse through its religiously informed efforts in grassroots community organizing and education, Lara Medina showcases the crucial role played by Las Hermanas in the articulation of a spiritually and politically grounded Latina/Chicana identity.
AUTHOR BIOGRAPHY
Lara Medina is Associate Professor, Department of Chicano and Chicana Studies, California State University, Northridge.
REVIEWS
"Las Hermanas is an original piece of research and writing. Medina provides important knowledge about a Latina religious group and sheds light on the historical context out of which Las Hermanas emerged. This book adds to our understanding of the diversity of religious experiences in the U.S. as well as broadens our understanding of the 1960s social movements. Las Hermanas is a significant contribution to the developing historiography concerning the Chicano Movement as well as a welcome corrective to the male-centered historical treatment of the movement."—Professor Mario García, Department of History and Chicano Studies, University of California, Santa Barbara, and author of several books on Chicano/a history including Mexican Americans: Leadership, Ideology, and Identity 1930-1960 and Migrant Daughter: Coming of Age as a Mexican American Woman


"Lara Medina's book is groundbreaking in its contribution to both Latino/a and Roman Catholic history. It offers new material on Las Hermanas, an extremely important organization that has long been neglected by religious historians. In addition, the book brings forth the religious dimension of Chicana/Latina political activism, an aspect often ignored by secular Chicano/a scholars."—Michelle A. Gonzalez, Assistant Professor, Theological Studies, Loyola Marymount University, and author of Sor Juana: Beauty and Justice in the Americas