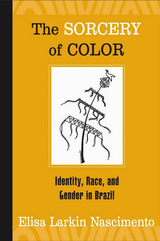 Originally published in 2003 in Portuguese, The Sorcery of Color argues that there are longstanding and deeply-rooted relationships between racial and gender inequalities in Brazil. In this pioneering book, Elisa Larkin Nascimento examines the social and cultural movements that have attempted, since the early twentieth century, to challenge and eradicate these conjoined inequalities.

The book's title describes the social sleight-of-hand that disguises the realities of Brazilian racial inequity. According to Nascimento, anyone who speaks of racism—or merely refers to another person as black—traditionally is seen as racist. The only acceptably non-racist attitude is silence. At the same time, Afro-Brazilian culture and history have been so overshadowed by the idea of a general "Brazilian identity" that to call attention to them is also to risk being labeled racist.

Incorporating leading international scholarship on Pan Africanism and Afrocentric philosophy with the writing of Brazilian scholars, Nascimento presents a compelling feminist argument against the prevailing policy that denies the importance of race in favor of a purposefully vague concept of ethnicity confused with color.