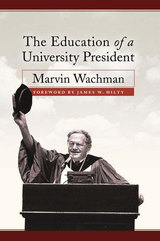 Marvin Wachman's parents were Russian Jewish immigrants with little formal education. Yet they instilled in their son the values of education, self-improvement, and perseverance. Because of Wachman's beliefs in human progress, he learned not only how to survive in hard times, but how to flourish. A newly minted PhD, Wachman served in World War II as a combat platoon sergeant where he was further drawn to teaching by his desire for work of lasting value. He proved a man of vision and administrative ability, qualities that suited him to lead two great universities renowned for their commitment to extending educational opportunity. During the Civil Rights era, Wachman served as the president of Lincoln University, the country's oldest historically Black college; later he guided Temple University to greater fiscal security, and under his leadership, education programs for Temple students were launched in Europe and Asia .The Education of a University President recalls Wachman's distinguished career in education and his steadfast dedication to liberal values.
AUTHOR BIOGRAPHY
Dr. Marvin Wachman is a former President of Temple University as well as of Lincoln University.
TABLE OF CONTENTS