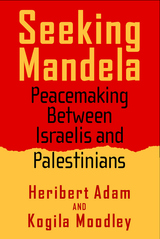 The ongoing violence, despair and paralysis among Israelis and Palestinians resemble the gloomy period in South Africa during the late 1980s. Heribert Adam and Kogila Moodley show that these analogies with South Africa can be applied to the Israeli-Palestinian conflict for two purposes: to showcase South Africa as an inspiring model for a negotiated settlement and to label Israel a "colonial settler state" that should be confronted with strategies (sanctions, boycotts) similar to those applied against the apartheid regime. Because of the different historical and socio-political contexts, both assumptions are problematic. Whereas peacemaking resulted in an inclusive democracy in South Africa, the favored solution for Israel and the West Bank is territorial separation into two states. Adam and Moodley speculate on what would have happened in the Middle East had there been what they call "a Palestinian Mandela" providing unifying moral and strategic leadership in the ethnic conflict. A timely, relevant look at the issues of a polarized struggle, Seeking Mandela is an original comparison of South Africa and Israel, as well as an important critique on the nature of comparative politics.
AUTHOR BIOGRAPHY
Heribert Adam is a political sociologist at Simon Fraser University in Vancouver and also teaches at the University of Cape Town. He has published extensively on comparative ethnic conflicts and peacemaking, particularly socio-political developments in South Africa. He was awarded the 1998 Konrad Adenauer Prize of the Alexander von Humboldt Foundation and elected Fellow of the Royal Society of Canada.Kogila Moodley is a sociologist at the University of British Columbia and was the first holder of the David Lam Chair. Raised in the Indian community of apartheid South Africa, her research is focused on critical multiculturalism, anti-racism education and citizenship. She has served as President of the International Sociological Association's Research Committee on Ethnic, Minority and Race Relations (1998-2002).Adam and Moodley live in Vancouver and Cape Town.
TABLE OF CONTENTS


Preface: Reflections on Moral LiteracyAcknowledgmentsIntroduction Political Travel through the Holy LandThe Gaze of Outsiders • Conversations with Palestinians • Unscrambling HistoryPart I. Probing the South African Lessons1. Controversial Issues in OverviewContext • Uses and Abuses of the Israel-South Africa Comparison • The Relevance of the Middle East for South Africa • False Analogies and Theoretical Approaches2. Nationalism, Patriotism, and Multiculturalism RevisitedUltra-Nationalism in Defiance of Universal Norms • Critical Patriotism • Multiculturalism and Cosmopolitanism3. A Brief History of South Africa and ApartheidThe History of South African Colonialism • The Rise of Afrikaner Nationalism • The Many Faces of Apartheid • Resistance and Liberation4. The Problematic Israel-South Africa AnalogyEconomic Interdependence • Unifying versus Divisive Religion • Third-Party Intervention • Embattled Leadership in Controversial Compromises • A Militarized Political Culture • Violence, Deterrence, and the Psychic Energy of Martyrdom • Rescuing Negotiations5. Visions of EndgameIslamic Extremist Positions • Jewish Extremist Positions • Two-State Positions • A Multicultural Common StatePart II. After the Violence6. Collective Memories: How Democracies Deal with the Crimes of Previous RegimesThe Politics of Memory • Conclusions7. The Politics of Reconciliation and Transitional JusticeTruth Commissions and the Globalization of Justice • Between Perpetrators and Victims • Success and Failure of the TRC8. An Israeli-Palestinian Truth Commission?Part III. Conclusions9. Solutions Revisited and Lessons DrawnDifferences and Similarities between South Africa and Israel • Palestine • Israel • Palestine in the International Context • Zionism, Anti-Zionism, and Post-Zionism Revisited in the Twenty-First Century • The Two-State versus the Common-State Option • South African Lessons for Peacemaking • Future ScenariosNotesWorks CitedIndex