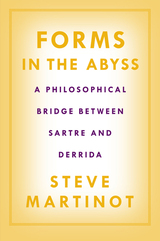 The relationship between the existentialist Jean-Paul Sartre and the post-structuralist Jecques Derrida has never been fully examined until now. In Forms in the Abyss, Steve Martinot finds, between these two important philosophical thinkers of the twentieth century, "a common uncommonality" by which he sees them confront each other as "kindred souls" despite their vast differences.

Martinot argues that a bridge between these two thinkers can be constructed.  He demonstrates that one can use the critical tools provided by Derrida, and the forms of discourse and reasoning developed by Sartre, to set the two in dialogue with each other. In the process, Martinot develops a theory of dialogue that incorporates both ethics and form and contributes a new way of thinking about critical and social theory.  More importantly, he adds a new ethical and political imperative to postmodern thought that many dritics have often found missing in the works of thinkers like Derrida.
AUTHOR BIOGRAPHY
Steve Martinot is Instructor at the Center for Interdisciplinary Programs at San Francisco State University. He is the author of The Rule of Racialization: Class, Identity, Governance (Temple), editor of two previous books, and translator of Racism by Albert Memmi.
TABLE OF CONTENTS