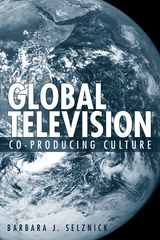 The face of U.S. television broadcasting is changing in ways that are both profound and subtle. Global Television uncovers the particular processes by which the international circulation of culture takes place, while addressing larger cultural issues such as identity formation.

Focusing on how the process of internationally made programming such as Highlander: The Series and The Odyssey—amusingly dubbed “Europudding” and “commercial white bread”—are changing television into a transnational commodity, Barbara Selznick considers how this mode of production—as a means by which transnational television is created—has both economic rewards and cultural benefits as well as drawbacks.

Global Television explores the ways these international co-productions create a “global” culture as well as help form a national identity. From British “brand” programming (e.g, Cracker) that airs on A&E in the U.S. to children’s television programs such as Plaza Sesamo, and documentaries, Selznick indicates that while the style, narrative, themes and ideologies may be interesting, corporate capitalism ultimately affects and impacts these programs in significant ways.

AUTHOR BIOGRAPHY
Barbara J. Selznick is an Associate Professor in the School of Media Arts, The University of Arizona and author of Sure Seaters: The Emergence of Art House Cinema.
REVIEWS
"Global Television is well focused, disciplined, imaginative, and original; the global outlook and free ranging expertise across borders are signature virtues. It looms to be a blueprint for the emergent field of globally-centric media studies."
—Thomas Doherty , American Studies Department, Brandeis University


Introduction: McTelevision in the Global Village…..

Conclusion: Transculturation or the Expansion of Modern Capitalism…..