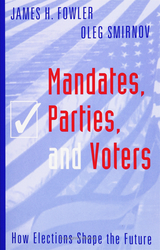 Most research on two-party elections has considered the outcome as a single, dichotomous event: either one or the other party wins. In this groundbreaking book, James Fowler and Oleg Smirnov investigate not just who wins, but by how much, and they marshal compelling evidence that mandates-in the form of margin of victory-matter. Using theoretical models, computer simulation, carefully designed experiments, and empirical data, the authors show that after an election the policy positions of both parties move in the direction preferred by the winning party-and they move even more if the victory is large. In addition, Fowler and Smirnov not only show that the divergence between the policy positions of the parties is greatest when the previous election was close, but also that policy positions are further influenced by electoral volatility and ideological polarization.

This pioneering book will be of particular interest to political scientists, game theoreticians, and other scholars who study voting behavior and its short-term and long-range effects on public policy.