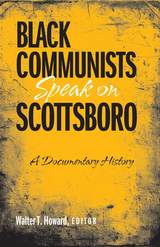 On March 25, 1931, Alabama police detained nine young African AMerican men at a railroad stop not far from Scottsboro.  In the process, they encountered two white women --  who promptly accused the young men of raping them.  Soon after, all-white juries found the nine youths guilty and eight of them were sentenced to death.  Although many Americans were outraged by the injustices of the case, the loudest voices raised in protest were those of members of the American Communist Party.

Many white Communists spoke out, but black Communists took the lead in organizing public protests and legal responses.  As this surprising book makes clear, they were acting at the direction of the Communist International  (Comintern), which had directed them to address the "Negro problem."  Now, with the opening of formerly inaccessible Communist party archives, this collection of primary documents reveals the little-known but major roles played by black Communists in the case of "the Scottsboro Boys."
AUTHOR BIOGRAPHY
Walter T. Howard is Professor of American History at Bloomsburg University in northeastern Pennsylvania and the editor of B.D. Amis, African American Radical: A Short Anthology of His Writings and Speeches. He was awarded The Gustavus Myers Award for Human Rights Scholarship, for his book Lynchings: Extralegal Violence in Florida  During the 1930s.
TABLE OF CONTENTS