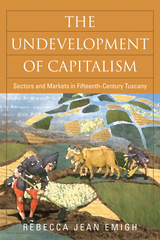 The results of a decade-long research study by the author, in The Undevelopment of Capitalism Rebecca Jean Emigh argues that the expansion of the Florentine economic market in the fifteenth century helped to undo the development of markets of other economies, especially the rural economy of Tuscany, paradoxically slowing down the economic development of northern Italy overall.  This "undeveloping" process, as Emigh calls it, produced an advanced economy at the time of the late Middle Ages and early Renaissance, but created the conditions whereby much of this area of Europe delayed its full development into industrial capitalism by many ages, so that full-scale industrialization happened in other places first, leaving northern Italy behind.

As a lucid explanation of capitalism that turns back the clock even further on its birth, The Undevelopment of Capitalism makes a significant contribution to the studies of capitalism, historical sociology, and theories of markets as economic and cultural institutions.
AUTHOR BIOGRAPHY
Rebecca Jean Emigh is Professor of Sociology at the University of California, Los Angeles.
TABLE OF CONTENTS