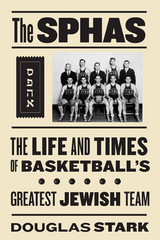 Founded in 1918, the South Philadelphia Hebrew Association's basketball team, known as the SPHAS, was a top squad in the American Basketball League-capturing seven championships in thirteen seasons-until it disbanded in 1959. In The SPHAS, the first book to chronicle the history of this team and its numerous achievements, Douglas Stark uses rare and noteworthy images of players and memorabilia as well as interviews and anecdotes to recall how players like Inky Lautman, Cy Kaselman, and Shikey Gotthoffer fought racial stereotypes of weakness and inferiority while spreading the game's popularity. Team owner Eddie Gottlieb and Temple University coach Harry Litwack, among others profiled here, began their remarkable careers with the SPHAS.

Stark explores the significance of basketball to the Jewish community during the game's early years, when Jewish players dominated the sport and a distinct American Jewish identity was on the rise. At a time when basketball teams were split along ethnic lines, the SPHAS represented the Philadelphia Jewish community. The SPHAS is an inspiring and heartfelt tale of the team on and off the court.

Douglas Stark is the Museum Director of the International Tennis Hall of Fame & Museum.

Preface
1. On the Road
2. A Jewish Game
3. A New League, a New Team
4. Prospect Hall and the Vissies
5. Shikey
6. Howard the Red
7. Saturday Night SPHAS' Habit
8. The Darlings of Philadelphia
9. Rosenberg to the Rescue
10. Basketball and War
11. The Influx of New York Players
12. Losing Home Court
13. The End of the Line
14. Playing it Straight
Epilogue: Memories Live On
Acknowledgments
Appendix A: Game-by-Game Standings for the SPHAS, American Basketball League
Appendix B: Year-by-Year Standings for the SPHAS
Appendix C: SPHAS Versus other Philadelphia Professional Teams
All-Time SPHAS Roster
Bibliography