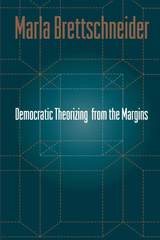 Democratic Theorizing from the Margins lays out the basic parameters of diversity-based politics as a still emerging form of democratic theory. Students, activists, and scholars engage in diversity politics on the ground, but generally remain unable to conceptualize a broad understanding of how "politics from the margins"-that is, political thinking and action that comes from groups often left on the outside of mainstream organizing and action-operates effectively in different contexts and environments. Brettschneider offers concrete lessons from many movements to see what they tell us about a new sort of democratic politics. She also addresses traditional democratic theories and draws on the myriad discerning practices employed by marginalized groups in their political activism to enhance the critical capacities of potential movements committed both to social change and democratic action.
AUTHOR BIOGRAPHY
Marla Brettschneider is Associate Professor of Political Philosophy with a joint appointment in Political Science and Women's Studies at the University of New Hampshire where she also Coordinate the Queer Studies program. Her latest book is The Family Flamboyant:  Race Politics, Queer Families, Jewish Lives, and her book The Narrow Bridge: Jewish Views on Multiculturalism was awarded the Gustavus Meyers Human Rights Award.
REVIEWS

"Democratic Theorizing from the Margins is a very well-written lucidly argued, important and timely book that deserves a wide audience…Her work is an excellent platform from which to examine what effectively is the current crisis of democracy, though politicians and the media compel us not to notice."
—Contemporary Sociology


Contents
Acknowledgments
1. Introduction
2. When: History
3. Who: Identity
4. What: Recognition
5. Why: Rethinking Universals and Particulars
6. Where: Multiple Publics
7. How: Minoritizing and Majoritizing
Notes
References
Index