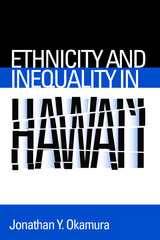 Challenging the dominant view of Hawai’i as a “melting pot paradise”—a place of ethnic tolerance and equality—Jonathan Okamura examines how ethnic inequality is structured and maintained in island society. He finds that ethnicity, not race or class, signifies difference for Hawaii’s people and therefore structures their social relations. In Hawai’i, residents attribute greater social significance to the presumed cultural differences between ethnicities than to more obvious physical differences, such as skin color.

According to Okamura, ethnicity regulates disparities in access to resources, rewards, and privileges among ethnic groups, as he demonstrates in his analysis of socioeconomic and educational inequalities in the state. He shows that socially and economically dominant ethnic groups—Chinese Americans, Japanese Americans, and Whites—have stigmatized and subjugated the islands’ other ethnic groups—especially Native Hawaiians, Filipino Americans, and Samoans. He demonstrates how ethnic stereotypes have been deployed against ethnic minorities and how these groups have contested their subordinate political and economic status by articulating new identities for themselves.

AUTHOR BIOGRAPHY
Jonathan Y. Okamura is an Associate Professor in the Department of Ethnic Studies at the University of Hawai'i at Manoa. A social anthropologist, he is the author of Imagining the Filipino American Diaspora: Transnational Relations, Identities, and Communities.
TABLE OF CONTENTS