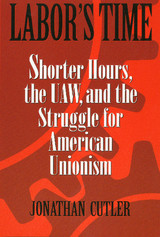 The movement for a shorter workweek that once defined the labor movement in the United States was largely displaced by the new corporatist structure of organized labor in the post-New Deal era. Labor's Time examines the changes that occurred within organized labor and traces their influence on the decline of the shorter hours movement. Focusing on the internal union politics of the influential United Automobile Workers and Local 600, its chapter at Henry Ford's massive River Rouge factory, Jonathan Cutler demonstrates how an all-but-forgotten interracial movement for a shorter workweek during the 1950s and 1960s became a casualty of an increasingly top-heavy union bureaucracy that lost touch with the desires, fears, and aspirations of rank and file workers and dug its own grave in the process. Jonathan Cutler examines the political context in which the shorter hours movement emerged within Local 600 in the 1940s, then chronicles the attempts by Walter Reuther, the head of the UAW, to suppress it. Cutler also reviews the role the Communist Party played in the controversy. Finally, he documents the UAW response to rank and file pressure for a shorter workweek, and how the local's own organizational flaws allowed Reuther and the national union to wrest control from the dissidents. Fresh and boldly written, Labor's Time recreates a moment when unions—as a movement, not as an amalgam of leaders—could have transformed the landscape of work in the United States.
AUTHOR BIOGRAPHY
Jonathan Cutler is Assistant Professor in the Department of Sociology at Wesleyan University and co-editor of Post-Work.
TABLE OF CONTENTS