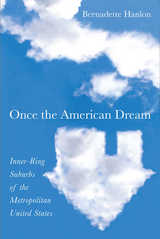 At one time, a move to the suburbs was the American Dream for many families. However, despite the success of Levittown, NY,impoverished “inner-ring” suburbs—those closest to the urban core of metropolitan cities—like Lansdowne, MD, are in decline. As aging housing stock, foreclosures, severe fiscal problems, slow population growth, increasing poverty, and struggling local economies affect inner-ring suburbs, what can be done to save them?

Once the American Dream analyzes this downward trend, examining 5,000 suburbs across 100 different metropolitan areas and census regions in 1980 and 2000. Hanlon defines the suburbs’ geographic boundaries and provides a ranking system for assessing and acting upon inner-ring suburban decline. She also illuminates her detailed statistical analysis with vivid case studies. She demonstrates how other suburbs, particularly those in the outer reaches of cities, flourished during the 1980s and 1990s. Once the American Dream closes with a discussion of policy implications and recommendations for policymakers and planners who deal with suburbs of various stripes.
AUTHOR BIOGRAPHY
Bernadette Hanlon is a research analyst at the Center for Urban Environmental Research and Education (CUERE) at the University of Maryland, Baltimore County (UMBC). Her research interests include suburban growth and decline, urban policy and planning, and state and local government.
REVIEWS

“An engaging contemporary study of twenty years of suburban change in the U.S., Once the American Dream is more comprehensive than earlier works on suburbs, focusing on differences among suburbs rather than the city/suburban differences. The breadth of stories told against the analysis helps provide good insights and makes the national picture more local to readers. Hanlon ably demonstrates how to apply useful methodologies to the study of contemporary metropolitan geography.”—David L. Phillips, Professor of Urban and Environmental Planning, University of Virginia