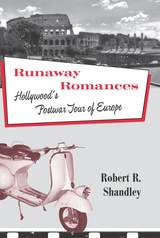 In the 1950s and early 1960s, America imagined itself young and in love in Europe. And Hollywood films of the era reflected this romantic allure. From a young and naïve Audrey Hepburn falling in love with Gregory Peck in Roman Holiday to David Lean’s Summertime, featuring Katherine Hepburn’s sexual adventure in Venice, these glossy travelogue romances were shot on location, and established an exciting new genre for Hollywood.

As Robert Shandley shows in Runaway Romances, these films were not only indicative of the ideology of the American-dominated postwar world order, but they also represented a shift in Hollywood production values. Eager to capture new audiences during a period of economic crisis, Hollywood’s European output utilized the widescreen process to enhance cinematic experience. The films—To Catch a Thief,  Three Coins in the Fountain, and Funny Face among them—enticed viewers to visit faraway places for romantic escapades. In the process, these runaway romances captured American fantasies for a brief, but intense, period that ended as audiences grew tired of Old World splendors, and entered into a new era of sexual awakening.

Robert R. Shandley is Associate Professor of Film Studies and German at Texas A&M University. He is the author of Rubble Films: German Cinema in the Shadow of the Third Reich (Temple) and editor of Unwilling Germans? The Goldhagen Debate.