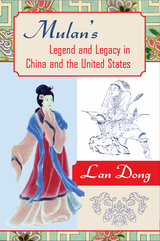 Mulan, the warrior maiden who performed heroic deeds in battle while dressed as a male soldier, has had many incarnations from her first appearance as a heroine in an ancient Chinese folk ballad. Mulan’s story was retold for centuries, extolling the filial virtue of the young woman who placed her father's honor and well-being above her own. With the publication of Maxine Hong Kingston’s The Woman Warrior in the late 1970s, Mulan first became familiar to American audiences who were fascinated with the extraordinary Asian American character. Mulan’s story was recast yet again in the popular 1998 animated Disney film and its sequel.

In Mulan’s Legend and Legacy in China and the United States, Lan Dong traces the development of this popular icon and asks, "Who is the real Mulan?" and "What does authenticity mean for the critic looking at this story?" Dong charts this character’s literary voyage across historical and geographical borders, discussing the narratives and images of Mulan over a long time span—from premodern China to the contemporary United States to Mulan’s counter-migration back to her homeland.

As Dong shows, Mulan has been reinvented repeatedly in both China and the United States so that her character represents different agendas in each retelling—especially after she reached the western hemisphere. The dutiful and loyal daughter, the fierce, pregnant warrior, and the feisty teenaged heroine—each is Mulan representing an idea about female virtue at a particular time and place.

Lan Dong is Assistant Professor of English at the University of Illinois at Springfield.