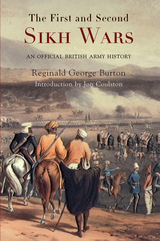 The Wars That Gave Great Britain Control of India
The First and Second Sikh Wars of the 1840s were the final battles that secured British domination of the Indian subcontinent for the next century. Noted for both their brutality and sophistication in tactics—with large-scale cavalry clashes, sieges, and artillery and infantry engagements—the wars against the Sikh principalities not only handed control of India to Great Britain, but the defeated Sikh armies ended up becoming some of the most loyal and ablest soldiers of the British Empire. The lessons from these wars also influenced changes in British military policy and strategies, particularly against indigenous peoples. In 1911, the British Army command asked its historical branch in India to prepare a military history of the Sikh Wars. The result, The First and Second Sikh Wars, is a publication rich in detail and analysis and a treasure trove of background information about the British Army in India, Sikh culture at the time, and the battles of Ferozeshah, Aliwal, Chillianwala, and Gujrat. Despite the importance of these wars in the history of both the nineteenth century and the modern era, there are no similar complete narrative accounts of these conflicts available that rely on official records of the period. This facsimile is enhanced by historian Jon Coulston's new introduction and suggestions for further reading.
AUTHOR BIOGRAPHY
Reginald George Burton (1864–1951) was a military historian and author.
Jon Coulston is a historian at St Andrews University, Scotland. He reintroduced Westholme's editions of Cavalry: Its History and Tactics and The Life of Belisarius.