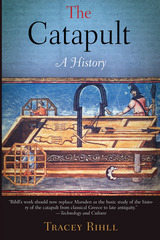 A Major Contribution to the History of Technology and Ancient Warfare

The most recognized military device of ancient times and the source of continued fascination and popular appeal, the catapult represented a major shift in the conduct of warfare. The catapult which literally means a device to “hurl [an object] across” was originally a sort of crossbow invented at the beginning of the fourth century B.C. in Syrakuse. Bows soon grew to the length of a modern bus, and in due course a completely new and better power source was invented. Instead of compound bows made of stretched sinew and compressed horn, the energy used to launch an object was stored in twisted ropes made of animal sinews: the torsion catapult had arrived. The torsion catapult quickly became the chief weapon of ancient arsenals and gave armies for the first time a weapon that could strike enemies at a distance with devastating effect, including shooting to and from ships, battering fortifications, and sending projectiles over walls. Catapults of all sizes became part of the regular equipment of the Roman army, and were used for centuries across the length and breadth of the empire to seize territory, and to defend it.

In The Catapult: A History, an authority on this device, historian Tracey Rihll, uses ancient literary sources and the latest archaeological findings to tell the story of this first machine of war. Dispelling any notion that the catapult was precision engineered in the modern sense, the author explains how a robust formulaic design allowed a variety of machines and missiles to be used for particular battlefield conditions or military tasks. Also included are details of the author’s intriguing discovery that there were little personal catapults that were used like rifles. Although the catapult was displaced by the introduction of gunpowder and cannon, this device marks the beginning of mechanized warfare, the hallmark of modern fighting. Complete with line drawings and photographs, The Catapult is a major contribution to the history of technology and conflict.

AUTHOR BIOGRAPHY
TRACEY RIHLL is lecturer in Classics and Ancient History at the University of Wales, Swansea. She is author of Greek Science and many articles of ancient technology and science.