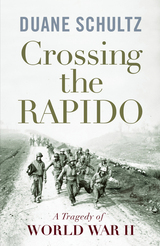 “Schultz convey stories of individual courage and fear. He presents the Rapido crossing as part of an experience that changed lives utterly.” —Publishers Weekly

The Rapido River was the last natural barrier between General Mark W. Clark’s Fifth U.S. Army and Rome. Ignoring intelligence reports that the Germans had significant forces protecting the opposite side of the river, Clark ordered the 36th Division to make a nighttime crossing on January 20, 1944. The division, already coming through some of the heaviest fighting in Italy, knew they could not succeed: they had to cross a fast-flowing river at night in bitter cold and face one of the strongest, most formidable German defensive lines in Europe, full of minefields, veteran troops, and withering artillery and mortar fire. Once in the water, men in full field gear were borne away by the current or vanished in massive explosions. The few who managed to reach the other side found themselves pinned down unable to move. Soldiers died by the hundreds, yet the stunned survivors who fell back to the launch site were ordered to attack again, this time in daylight. Of the 4,000 men who attempted the crossing, more than half did not return. General Clark never accepted blame for ordering the assault despite the numerous warnings he received from both British and American commanders. Although they were decimated, the division went on to lead a key surprise attack that opened Rome to Allied forces, and ultimately fought in France, where they had the distinction of capturing Hermann Goering and Field Marshal Gerd von Rundstedt.

In Crossing the Rapido: A Tragedy of World War II, Duane Schultz follows the action at the ground level using survivors’ interviews and army documents to tell the story of one division’s sacrifice in war. In doing so, he demonstrates that the American soldier will face the greatest odds without protest, but expects those in command to share any failure or success.

“Those of us who were present will always remember the men of the 36th, climbing silently in the night behind the enemy, armed with little but their American competence and a personal faith in their quiet, retiring general who had never let them down. If Generals Alexander and Clark received the key to the city of Rome, it was General Walker who turned the key and handed it to them.” —Eric Sevareid, reporting from Italy during World War II

“I have never seen so many dead as on that day.” —John Huston, Academy Award winning director during his wartime filming of The Battle of San Pietro

Duane Schultz is author of many books of history, including Into The Fire: Ploesti, The Most Fateful Mission of World War II, also available from Westholme Publishing.