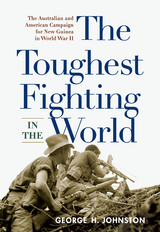 “No other writer has turned out a book on the fighting in New Guinea that can match Mr. Johnston’s. Superior literary quality projects this work far in advance of those earlier and more hasty accounts. Mr. Johnston is a young Australian war correspondent who lived through most of the action he describes. The reader will know that from the first page and is apt to find himself tensely hunched up as he is carried into the jungles by this writer's extraordinary reporting and artistry. As Mr. Johnston himself admits, the title sounds bombastic and the sensitive book purchaser might well shy from it. This would be a mistake, since the title is thoroughly honest.”—New York Times

“It is a book of episodes which are fitted together into a pattern that tells his story in compelling fashion. Mr. Johnston is a brilliant descriptive writer and the full flavor of this extraordinary battle is in his book.”—Saturday Review of Literature

Following their attacks on Pearl Harbor, the Dutch East Indies, and the Philippines, the Japanese invaded New Guinea in early 1942 as part of their attempt to create a Pacific empire. Control of New Guinea would enable Japan to establish large army, air force, and naval bases in close proximity to Australia. The Australians, with American cooperation, began a counterattack in earnest. The mountainous terrain covered with nearly impenetrable tropical forest and full of natural hazards resulted in an exceedingly grueling battleground. The struggle for New Guinea, one of the major campaigns of World War II, lasted the entire war, with the crucial fighting occurring in the first year. In The Toughest Fighting in the World, first published in 1943, Australian war correspondent George H. Johnston recorded the efforts of both the Australian and American troops, aided by the New Guinea native people, throughout 1942 as they fought a series of vicious and bitter battles against a determined foe. In one of the classic accounts of combat in World War II, the author makes a compelling case that the hardships endured by the soldiers in New Guinea from both nature and the enemy were among the most severe in the war.

GEORGE H. JOHNSTON (1912–1970) was a distinguished Australian war correspondent and author of a number of books, including My Brother Jack and Clean Straw for Nothing, both winners of Australia’s Miles Franklin Award. He was awarded an OBE by Queen Elizabeth II in 1969.