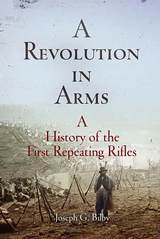 The Civil War-Era Invention That Changed How Wars Are Fought
Historians often call the American Civil War the first modern war, pointing to the use of observation balloons, the telegraph, trains, mines, ironclad ships, and other innovations. Although recent scholarship has challenged some of these “firsts,” the war did witness the introduction of the first repeating rifles. No other innovation of the turbulent 1860s would have a greater effect on the future of warfare. In A Revolution in Arms: A History of the First Repeating Rifles, historian Joseph G. Bilby unfolds the fascinating story of how two New England inventors, Benjamin Henry and Christopher Spencer, each combined generations of cartridge and rifle technology to develop reliable repeating rifles. In a stroke, the Henry rifle and Spencer rifle and carbine changed warfare forever, accelerating the abandonment of the formal battle line tactics of previous generations and when properly applied, repeating arms could alter the course of a battle. Although slow to enter service, the repeating rifle soon became a sought after weapon by both Union and Confederate troops. Oliver Winchester purchased the rights to the Henry and transformed it into “the gun that won the West.” The Spencer, the most famous of all Civil War small arms, was the weapon of choice for Federal cavalrymen. The revolutionary technology represented by repeating arms used in the American Civil War, including self-contained metallic cartridges, large capacity magazines, and innovative cartridge feeding systems, was copied or adapted by arms manufacturers around the world, and these features remain with us today.
AUTHOR BIOGRAPHY
Joseph G. Bilby received his BA and MA degrees in history from Seton Hall University and served as a lieutenant in the 1st Infantry Division in Vietnam in 1966- 1967. He is author of Small Arms at Gettysburg: Infantry and Cavalry Weapons in America’s Greatest Battle, also available from Westholme.