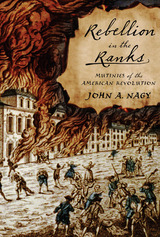 "It gives me great pain to be obliged to solicit the attention of the honorable Congress to the state of the army...the greater part of the army is in a state not far from mutiny...I know not to whom to impute this failure, but I am of the opinion, if the evil is not immediately remedied and more punctuality observed in future, the army must absolutely break up."—George Washington, September 1775

Mutiny has always been a threat to the integrity of armies, particularly under trying circumstances, and since Concord and Lexington, mutiny had been the Continental Army's constant traveling companion. It was not because the soldiers lacked resolve to overturn British rule or had a lack of faith in their commanders. It was the scarcity of food—during winter months it was not uncommon for soldiers to subsist on a soup of melted snow, a few peas, and a scrap of fat—money, clothing, and proper shelter, that forced soldiers to desert or organize resistance. Mutiny was not a new concept for George Washington. During his service in the French and Indian War he had tried men under his command for the offense and he knew that disaffection and lack of morale in an army was a greater danger than an armed enemy.

In Rebellion in the Ranks: Mutinies of the American Revolution, John A. Nagy provides one of the most original and valuable contributions to American Revolutionary War history in recent times. Mining previously ignored British and American primary source documents and reexamining other period writings, Nagy has corrected misconceptions about known events, such as the Pennsylvania Line Mutiny, while identifying for the first time previously unknown mutinies. Covering both the army and the navy, Nagy relates American officers' constant struggle to keep up the morale of their troops, while highlighting British efforts to exploit this potentially fatal flaw.