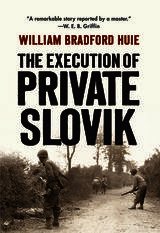 Seventy-Five Years Ago, the Last American Soldier Who Paid the Ultimate Price for Desertion
A New Edition of the Acclaimed Investigative Story

In August 1944, a drab convoy of raw recruits destined to join the 28th Division lumbered along a windy French road strewn with dead animals, shattered bodies, and burning equipment. One of those draftees was 24-year-old Eddie Slovik, a petty thief from Detroit who had spent his youth in and out of reform schools. Eddie's luck had recently changed, however, with a steady factory job and marriage to a beautiful girl who gave Eddie hope and security for the first time in his life. But their honeymoon—like that of many other wartime newlyweds—was interrupted by the call to service. The convoy came under intense artillery fire, and in the confusion Slovik became separated from his unit. He joined a Canadian outfit and traveled with them before finally reporting to the 28th Division. He carried a rifle but no ammunition. He was assigned to a platoon but walked away. Refusing to kill, Slovik was arrested, court martialed, and condemned to death. Hundreds of soldiers were tried for desertion during World War II and sentenced to die, but only Eddie Slovik paid the price, supposedly as a deterrent, yet word of the nature of his death was never officially released to the public.

In The Execution of Private Slovik, considered to be among the best investigative books ever written, journalist and author William Bradford Huie reconstructs this entire story with the full cooperation of the U.S. Army in order to find out what made Eddie Slovik an unlikely pacifist and why the affair was covered up. Through interviews with those who knew him and the hundreds of letters to his wife, the author reveals a hard luck depression-era kid who when faced with the reality of war realized that he simply could not kill another human being. Throughout, Huie reveals how Eddie Slovik's death has much to tell us about life and duty to one's country. This edition marking the seventy-fifth anniversary of the sentence being carried out, contains a new introduction by the author's daughter.

Praise for The Execution of Private Slovik:

"In the hands of an expert, who writes both passionately and with an almost transparent effort to be fair to all concerned, the story raises questions to which our wisest leaders still lack satisfying answers."
—New York Times

"A remarkable story reported by a master."—W. E. B. Griffin

"It is very likely that William Bradford Huie's The Execution of Private Slovikwill long survive the official histories of World War II. It is a big book and Mr. Huie deserves some sort of rich reward for this unburying of an incident of the war which must disturb us all. For Slovik was more than a 'coward.' He not only did not want to die but he did not want to kill, and one must look far in literature for a figure so moving as Private Slovik wandering about Europe not with bullets in his cartridge belt but with writing paper. The question is not 'How might we improve military procedures?' The question is, 'What has happened to love in our world when he who would rather love than kill must die?'"—from a letter to the New York Times

AUTHOR BIOGRAPHY
William Bradford Huie (1910–1986) was one of the most successful American journalists and authors of the twentieth century. Huie spent five decades chronicling the essential conflicts of his time. He landed on Omaha Beach on D-day, 1944, and the stories he wrote during the Civil Rights Movement captured the world’s attention and continue to be studied and referenced today. He is the author of more than twenty books that together have sold over thirty million copies, and six, including The Execution of Private Slovik, were made into films.