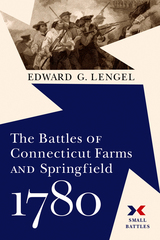 The Final Significant Clashes of the Revolutionary War in the North
By the spring of 1780, American fortunes were at a low point. Charleston, South Carolina, fell to British forces on May 12. At Morristown, New Jersey, George Washington’s army struggled to recover from the worst winter of the entire war. The national economy failing, his troops short of supplies and on the verge of mutiny, Washington prepared for an all-out assault on British-occupied New York City with the support of approaching French naval and land forces under General Rochambeau. The planned attack was a gamble born of desperation. Washington felt he had to risk it, or face certain defeat. In New York City, German General Wilhelm von Knyphausen sensed opportunity. Commanding there in the absence of British General Henry Clinton, who was on his way back from Charleston, Knyphausen hoped that a quick strike into New Jersey could deliver a staggering blow to Washington’s weakened army. The June 7–8 Battle of Connecticut Farms, however, found American militia and Continentals—mostly soldiers of General William Maxwell’s New Jersey Brigade—to be shockingly stalwart. In a series of sharp engagements, fought hard on both sides, the Americans convinced Knyphausen to turn back. Clinton, fresh from his victory in the South, tried again on June 23 to end the war. His advance into New Jersey, intended to draw Washington into the open and perhaps capture Morristown, culminated in the Battle of Springfield. Once again, though, Washington’s hardened soldiers, led by men like Colonel Israel Angell, Colonel Elias Dayton, and Major “Light Horse Harry” Lee, fought Clinton’s forces to a standstill.
The Battles for Connecticut Farms and Springfield, 1780, by distinguished historian Edward G. Lengel, chronicles these two important battles that marked a turning of the tide in the Revolutionary War. Drawing on newly available primary sources, the author presents a fresh and engaging interpretation of these events, which exposed King George III’s declining military fortunes in North America even as they revealed the resilience of George Washington’s army.

The Small Battles Series: Military History as Local History
Mark Edward Lender and James Kirby Martin, Series Editors
Small Battles offers a fresh and important new perspective on the story of America’s early conflicts. It was the small battles, not the clash of major armies, that truly defined the fighting during the colonial wars, the American Revolution, the War of 1812, and the hostilities on the frontiers. This is dramatic military history as seen through the prism of local history—history with a depth of detail, a feeling for place, people, and the impact of battle and its consequences that the story of major battles often cannot convey. The Small Battles Series focuses on America’s military conflicts at their most intimate and revealing level.
AUTHOR BIOGRAPHY
Edward G. Lengel is an award-winning historian, lecturer, and author of many books, including Inventing George Washington: America’s Founder in Myth and Memory and General George Washington: A Military Life, finalist for the George Washington Book Prize. As editor-in-chief of the Papers of George Washington project at the University of Virginia, he was awarded the National Humanities Medal.
REVIEWS
“Edward G. Lengel’s narrative on the Battles of Connecticut Farms and Springfield in June 1780 effectively shows how, despite a lack of men and supplies, the Continental Army and New Jersey militiamen under the command of Generals George Washington and Nathanael Greene were able to hold off the better trained and armed British, Hessian, and Loyalist troops under the command of General Wilhelm von Knyphausen. Drawing on multiple primary sources, Lengel’s narrative describes the military operations around Connecticut Farms and Springfield, New Jersey, and how the success of the Americans would carry over to military operations throughout the remainder of the war in the southern colonies. . . . The contribution of this work and those to come in the “Small Battles” series are essential to understanding how even the smallest of engagements had a meaningful impact on military operations during the American Revolution.”—Journal of Military History

“Edward G. Lengel brings to life the June 1780 engagements that marked the British Army’s last major pitched battles in the North. Lengel captures the essence of a critical period of the war and how it played out in a series of brief but sharp encounters in central New Jersey. While drawing on established historiography of the battles, the author incorporates lesser used accounts, particularly those of the Hessians and General Knyphausen himself. Complemented by a series of contemporary and modern maps, the engagements of Connecticut Farms and Springfield are made easy to follow in a book that should make an excellent addition to any Revolutionary library.”—Todd W. Braisted, author of Grand Forage 1778: The Battleground Around New York City