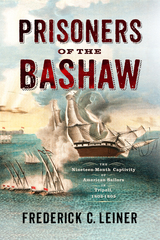 On October 31, 1803, the frigate USS Philadelphia ran aground on a reef a few miles outside the harbor of Tripoli. Since April 1801, the United States had been at war with Tripoli, one of the Barbary “pirate” regimes, over the payment of annual tribute—bribes so that American merchant ships would not be seized and their crews held hostage. After hours under fire, the Philadelphia, aground and defenseless, surrendered, and 307 American sailors and marines were captured. Manhandled and stripped of their clothes and personal belongings, the men of the Philadelphia were paraded before the Bashaw of Tripoli, Yusuf Karamanali. The bashaw ordered the crew moved into an old warehouse, and the officers were eventually moved to a dungeon beneath the Bashaw’s castle. While the officers were treated as “gentlemen,” although imprisoned, the sailors worked as enslaved laborers. Regularly beaten and given a meager diet, several died in captivity; escape attempts failed, while a few ended up converting to Islam and joined their captors. President Thomas Jefferson, Congress, U.S. diplomats, and Commodore Edward Preble, commander of the naval squadron off Tripoli, grappled with how to safely free the American captives. The crew of the Philadelphia remained prisoners for nineteen months, until the Tripolitan War ended in June 1805.
The Philadelphia captives became the key to negotiations to end the war; the possibility existed that if threatened too much, the Bashaw would kill the captives. Ultimately, the United States paid $60,000 to get them back—about $200 per man—a sum less than the Bashaw’s initial demands for compensation. In June 1805, the Americans began their journey home. Combining stirring naval warfare, intricate diplomatic negotiations, the saga of surviving imprisonment, and based on extensive primary source research, Prisoners of the Bashaw: The Nineteen-Month Captivity of American Sailors in Tripoli, 1803-1805 by Frederick C. Leiner tells the complete story of America’s first great hostage crisis.
AUTHOR BIOGRAPHY
Frederick C. Leiner, a lawyer and historian, is the author of The End of Barbary Terror: America’s 1815 War Against the Pirates of North Africa and Millions for Defense: The Subscription Warships of 1798.
REVIEWS
“Frederick Leiner’s Prisoners of the Bashawis more than just a fascinating account of one of our country’s first steps onto the world stage. It is also a mirror for our times: international duplicity, public rhetoric interwoven with backroom compromises, and the audacity, suffering, and sheer heroism of our navy’s first officers and sailors. Leiner combines a fine ear for the language with a cinematographer’s eye, putting his readers at the president’s table, in the bashaw’s palace, suffering in a fetid prison, and aboard the rolling deck of an American frigate. This is a terrific read.”
—Tim McGrath, author of Give Me A Fast Ship: The Continental Navy and America’s Revolution at Sea

“Prisoners of the Bashaw is a superbly written, meticulously researched, thoroughly gripping account of the grounding of an American warship off Tripoli and the capture of her 307-man crew some two centuries ago—an episode that became America’s first hostage crisis. With vivid descriptions of naval warfare, hostage-taking, ransom demands, intricate diplomacy, and foreign intrigue, Frederick Leiner captures challenges that have dogged US actions overseas from  the earliest years of the Republic. Prisoners of the Bashaw recounts bravery and treachery, the toils and fortitude of Americans enslaved, and the adroit international efforts (and payment) that ultimately freed the captured crew members after nineteen months of captivity. It is an absolutely first-rate read.”
—General David Petraeus, US Army (Ret.), former Commander of the Surge in Iraq, US Central Command, and NATO/US Forces in Afghanistan, and former Director of the CIA