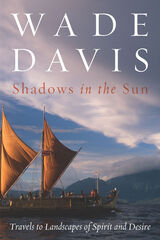 Wade Davis has been called "a rare combination of scientist, scholar, poet and passionate defender of all of life's diversity." In Shadows in the Sun, he brings all of those gifts to bear on a fascinating examination of indigenous cultures and the interactions between human societies and the natural world.

Ranging from the British Columbian wilderness to the jungles of the Amazon and the polar ice of the Arctic Circle, Shadows in the Sun is a testament to a world where spirits still stalk the land and seize the human heart. Its essays and stories, though distilled from travels in widely separated parts of the world, are fundamentally about landscape and character, the wisdom of lives drawn directly from the land, the hunger of those who seek to rediscover such understanding, and the consequences of failure.

As Davis explains, "To know that other, vastly different cultures exist is to remember that our world does not exist in some absolute sense but rather is just one model of reality. The Penan in the forests of Borneo, the Vodoun acolytes in Haiti, the jaguar Shaman of Venezuela, teach us that there are other options, other possibilities, other ways of thinking and interacting with the earth." Shadows in the Sun considers those possibilities, and explores their implications for our world.

Wade Davis holds degrees in anthropology and biology, and received his Ph.D. in ethnobotany, from Harvard University. He spent over three years in the Amazon and Andes as a plant explorer, and later went to Haiti to investigate folk preparations implicated in the creation of zombies. The Haiti assignment led to his writing The Serpent and the Rainbow (Simon and Schuster, 1986), an international bestseller that was later released as a feature motion picture. He has published more than 90 scientific and popular articles on subjects ranging from Haitian vodoun and Amazonian myth and religion to the global biodiversity crisis, the traditional use of psychotropic drugs, and the ethnobotany of South American Indians. Among his other books are Nomads of the Dawn (Pomegranate Press, 1995), Passage of Darkness (University of North Carolina Press, 1988) and One River (Simon and Schuster, 1996).