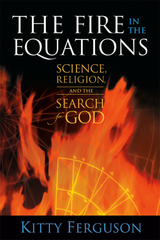 “ In this beautifully and intelligently written book, Ferguson not only reports on some of the intellectual tremors jolting the world of thinking women and men, but also considers the basic questions with penetrating analysis, yet at a very readable level. . . . An excellent book.” —Choice

Heralded for its readability and scholarship, The Fire in the Equations offers a fascinating discussion of scientific discoveries and their impact on our beliefs. The book’s title is derived from Dr. Stephen Hawking’s pondering, “What is it that breathes fire into the equations and makes a universe for them to describe?”

Originally published in the U.S. in 1995, it provides an excursion through new theories of quantum physics and cosmology, ranging from the nature of time, the big bang, the “unreasonable effectiveness” of mathematics, laws of nature and their possible relation to God, chaos theory, black holes, Heisenberg’s uncertainty principle, particle physics, Darwin's theory of evolution, and the role of God in all these equations. It even raises such questions as “how God might answer prayers” from the point of view of physics.

While she gives no absolute answers, Kitty Ferguson takes the reader through a world of paradoxes and improbabilities, explaining how it is possible to believe both in a pre-determined universe and in free will as a theory of human behavior. She concludes that what we know about science doesn't necessarily make God inevitable, but does not rule God out either.

Kitty Ferguson, a former professional musician with a life long interest in science, is an independent scholar and lecturer who lives in Cambridge, England, and South Carolina. She has also written the best-selling books Black Holes in Space Time and Stephen Hawking: Quest for a Theory of Everything.

TABLE OF CONTENTS
Contents
Preface to 2004 Edition
A Word about Inclusive Language
Acknowledgments
1. 'They Buried Him at Westminster Abbey'
2. Seeing Things
3. Almost Objective
4. Romancing the Creation
5. The Elusive Mind of God
6. The God of Abraham and Jesus
7. Inadmissible Evidence
8. Theory of Everything...Mind of God
Notes
Bibliography
Index
REQUEST ACCESSIBLE FILE