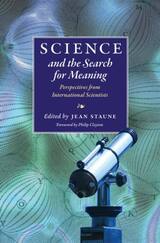 As the organizer of some of the most important meetings in science and religion in Europe, Jean Staune is in a core position to report on the dialogue between science and religion, primarily from the views of scientists. In this book, the translation of a recent French edition, he presents "audacious and rigorous" articles by fifteen renowned leaders in the field, of whom four are Nobel Prize winners. They represent nine countries and seven religions.

Each of the authors in this volume responds in a different way, addressing naturalism, materialism, the nature of consciousness, reductionism, and the quest for meaning.Two paradigms emerge, with those who say that God (or direction) can exist in the universe because we can understand certain things, while others say that God exists because we cannot understand the universe altogether. Their reflections on the accessibility and the mystery of the world show the extraordinary abstract revolution that took place in science during the twentieth century and the way this establishes a bridge between science and religion.

Jean Staune has degrees in the philosophy of science, mathematics, paleontology, political science, computer science, and management. He is the founder and general secretary of the Interdisciplinary University of Paris and an assistant professor in philosophy in one of Europe’s prominent business schools, the MBA program of the HEC. He has been an invited teacher in two Pontifical universities and in China’s Shandong University.