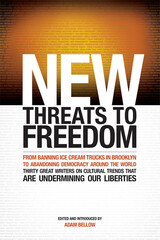 In the twentieth century, free people faced a number of mortal threats,ranging from despotism, fascism,
and communism to the looming menace of global terrorism. While the struggle against some of these overt dangers continues, some insidious new threats seem to have slipped past our intellectual defenses. These often unchallenged threats are quietly eroding our hard-won freedoms and, in some cases, are widely accepted as beneficial.

In New Threats to Freedom, editor and author Adam Bellow has assembled an all-star lineup of innovative thinkers to challenge these insidious new threats. Some leap into already raging debates on issues such as Sharia law in the West, the rise of transnationalism, and the regulatory state. Others turn their attention to less obvious threats, such as the dogma of fairness, the failed promises of the blogosphere, and the triumph of behavioral psychology.

These threats are very real and very urgent, yet this collection avoids projecting an air of doom and gloom. Rather, it provides a blueprint for intellectual resistance so that modern defenders of liberty may better understand their enemies, more effectively fight to preserve the meaning of freedom, and more surely carry its light to a new generation.

What are the new threats to freedom?

when has authority not claimed, when imposing trammels and curbs on liberty, that it does so for a wider good and a greater happiness?” —Christopher Hitchens

“The regulatory state amounts to a regressive tax that penalizes small independent producers and protects
the status quo.” —Max Borders

“The value of free expression is perceived to be at odds with goals that were considered ‘more important,’ like inclusiveness, diversity, nondiscrimination, and tolerance.” —Greg Lukianoff

“The masses cannot ultimately be free: only the individual can be.” —Robert D. Kaplan

“That old bugbear of postwar sociology—the mob-self—is now a reality. In a participatory/popularity culture, the freedom to think and act for ourselves becomes harder and harder to achieve.” —Lee Siegel

“The only solution to the new threats to American press freedom lies in organized resistance.” —Katherine Mangu-Ward

“The new behaviorism isn’t interested in protecting people’s freedom to choose; on the contrary, its core principle is the idea that only by allowing an expert elite to limit choice can individuals learn to break their bad habits.” —Christine Rosen

“There’s a world of Travis Bickles out there, and they’re not driving cabs. They’re reading blogs.” —Ron Rosenbaum

“The first amendment ensures not that speech will be fair, but that it will be free. It cannot be both.” —David Mamet

Join the conversation about these issues at www.newthreatstofreedom.com

AUTHOR BIOGRAPHY
Adam Bellow is vice president/executive editor at Harper-Collins. He has also been an executive editor at Doubleday (Random House) and was formerly editorial director of The Free Press (Simon & Schuster). His essays and articles have appeared in numerous publications. He is also the author of In Praise of Nepotism: A History of Family Enterprise from King David to George W. Bush (Anchor).
TABLE OF CONTENTS

• Where Have All the Grown-ups Gone?
Adam Bellow

2 The Closing of the Liberal Mind
Bruce Bawer

4 The Urge to Regulate
Max Borders

5 The Isolation of Today’s Classical Liberal
Richard A. Epstein

6 Single Women as a Threat to Freedom
Jessica Gavora

7 The Loss of the Freedom to Fail
Michael Goodwin

8 The European Union as a Threat to Freedom
Daniel Hannan

11 Multiculturalism and the Threat of Conformity
Christopher Hitchens

12 The Tyranny of the News Cycle
Robert D. Kaplan

19 Ingratitude and the Death of Freedom
Mark T. Mitchell

26 Shariah in the West
Stephen Schwartz

27 Participatory Culture and the Assault on Democracy
Lee Siegel

28 The U.N. Women’s Treaty as a Threat to Freedom
Christina Hoff Sommers

29 The Illusion of Innocence
Shelby Steele