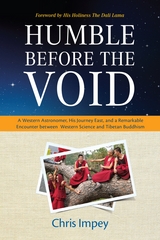 “This book will provide readers with a greater awareness of the spirit of curiosity and inquiry that lies at the heart of the Buddhist tradition, as well as the fruitfulness of maintaining active communication between the Buddhist and scientific commu­nities.” —from the Foreword by His Holiness the Dalai Lama

In Humble before the Void, Impey, a noted astronomer, educator, and author gives us a thor­oughly absorbing and engaging account of his journey to Northern India to teach in the first-ever “Science for Monks” leadership program. The pro­gram was initiated by His Holiness the Dalai Lama to introduce science into the Tibetan Buddhist monastic tradition.

In a vivid and compelling narrative, Impey intro­duces us to a group of exiled Tibetan monks whose charm, tenacity and unbridled enthusiasm for learning is infectious. Impey marvels not only at their enthusiasm, but at their tireless diligence that allows the monks to painstakingly build intri­cate sand mandalas—that can be swept away in an instant. He observes them as they meticulously count galaxies and notes how their enthusiasm and diligence stands in contrast to many American students who are frequently turned off by sci­ence’s inability to deliver easy, immediate payoffs. Because the Buddhist monks have had a limited science education, Impey must devise creative pedagogy. His new students immediately take to his inspired teaching methods, whether it’s the use of balloons to demonstrate the Hubble expansion or donning an Einstein mask to explain the theory of relativity.

Humble before the Void also recounts Impey’s experiences outside the classroom, from the monks’ eagerness to engage in pick-up basket­ball games and stream episodes of hip American sitcoms to the effects on his relationship with the teenage son who makes the trip with him. Moments of profound serenity and beauty in the Himalayas are contrasted with the sorrow of learning that other monks have set themselves on fire to protest the Chinese oppression in Tibet.

At the end of the three week program, both the monks and Impey have gained a valuable edu­cation. While the monks have a greater under­standing and appreciation of science, Impey has acquired greater self- knowledge and a deeper understanding of the nature of learning and teaching in the East and West. This understand­ing leads to a renewed enthusiasm for making his topic come alive for others.

AUTHOR BIOGRAPHY
Chris Impey is a university distinguished professor and deputy head of the department at the University of Arizona, in charge of academic programs, where he runs the nation’s largest undergraduate majors program in astronomy and the second largest PhD program. His research is on observational cosmology, gravitational lensing, and the evolution and structure of galaxies. Impey has over one-hundred seventy refereed publications, has written over forty popular articles on cosmology and astrobiology, and authored two introduc­tory textbooks and four popular science books: The Living Cosmos, How It Ends, How It Began, and Dreams of Other Worlds.
Impey has served as the vice president of the American Astronomical Society, and has also been an NSF distinguished teaching scholar, a Phi Beta Kappa visiting scholar, and the Carnegie Council on Teaching’s Arizona Professor of the Year. He was co-chair of the Education and Public Outreach Study Group for the Astronomy Decadal Survey of the National Academy of Sciences, and was elected a fellow of the Ameri­can Association for the Advancement of Science in 2009.

TABLE OF CONTENTS
Cover
Title
Copyright
Contents
Foreword by His Holiness the Dalai Lama
Prologue: The Edge of the Roof of the World
1. Knowledge and Uncertainty
2. Scales of Space
3. Beginnings and Endings
4. The Forces of Nature
5. Structure and Evolution
6. The Meaning of Life
Epilogue: The Seven Ages of Monk
Afterword
Index
REQUEST ACCESSIBLE FILE