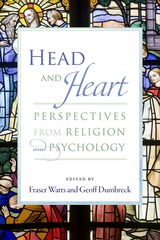 Theologians and religious figures often draw a distinction between religion of the ‘”head” and religion of the “heart,” but few stop to ask what the terms “head” and “heart” actually denote. Many assume that this distinction has a scriptural basis, and yet many Biblical authors used the word “heart” as a synonym for “mind.” In fact, there isn’t a strict separation of the two concepts until the modern period, as in Pascal’s famous claim that “the heart has its reasons that reason can not know.” Since then, many other philosophers and theologians have made a similar distinction.
The fact that this distinction has been so persistent makes it an important area of study. Head and Heart: Perspectives from Religion and Psychology takes an inter-disciplinary ap­proach, linking the thinking of theologians and philosophers with theory and research in present-day psychology. The tradition of using framing questions that have been developed in theology and philosophy can now be brought into dialogue with scientific approaches developed within cognitive psy­chology and neuroscience. Though these scientific approaches have not generally used the terms “head” and “heart,” they have arrived at a similar distinction in other ways. There is a notable convergence upon the realization that humans have two modes of cognition at their disposal that correspond to “head” and “heart.” The time is therefore ripe to bring the approaches of theology and science in to dialogue—an impor­tant dialogue that has been heretofore neglected.
Head and Heart draws on the unique expertise in relating theology and psychology of the University of Cambridge’s Psychology and Religion Research Group (PRRG). In addi­tion to providing historical and theoretical perspectives, the contributors to this volume will also address practical issues arising from the group’s applied work in deradicalisation and religious education.
Contributors include Geoff Dumbreck, Nicholas J. S. Gibson, Malcolm Guite, Liz Gulliford, Russell Re Manning, Glendon L. Moriarty, Sally Myers, Sara Savage, Carissa A. Sharp, Fraser Watts, Harris Wiseman, and Bonnie Poon Zahl.

TABLE OF CONTENTS
Cover
Title Page
Copyright
Table of Contents
Preface
Introduction
Part 1: Theology
1. Head and Heart in Christian Theology
2. “Keeping Alive the Heart in the Head”: Poetic Imagination as a Way of Knowing
3. “If You Can Keep Your Head When All about You / Are Losing Theirs and Blaming It on You”: Head and Heart in Recent Analytical Philosophy of Religion and Natural Theology
Part 2: Psychology
4. Empirical Measures of the Religious Heart
5. Dual-System Theories of Religious Cognition
Part 3: Application
6. Head and Heart in Preventing Religious Radicalization
7. Head God and Heart God: Pastoral Work to Help Clients Overcome Harmful God Images
8. Religious Education
Part 4: Integration
9. Head, Heart, and Wisdom
10. The Head and the Heart of the Matter in Hope and Forgiveness
Conclusion: Head and Heart in Cultural Context
About the Contributors
Index
REQUEST ACCESSIBLE FILE