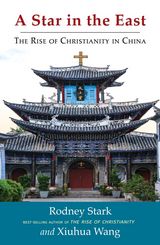 What is the state of Christianity in China, really? Some scholars say that China is invulnerable to religion. Some say that past efforts of missionaries have failed, writing off those who were converted as nothing more than “rice Christians,” or cynical souls who had frequented the missions for the benefits they provided. Some wonder if the Cultural Revolution extinguished any chances of Christianity in China.

Rodney Stark and Xiuhua Wang offer a different perspective, arguing that Christianity is alive, well, and even on the rise. Stark approaches the topic from an extensive research background in both Christianity and Chinese history, and Wang provides an inside look at Christianity and its place in her home country of China. Both authors cover the history of religion in China, disproving older theories concerning not only the number of Christians, but the kinds of Christians that have emerged in the past 155 years.  Stark and Wang claim that when just considering the visible Christians, those not part of underground churches, there are still thousands of Chinese being converted to Christianity each day, and forty new churches opening each week.

A Star in the East draws on two major national surveys to sketch a close-up of religion in China. A reliable estimate is that by 2007 there were approximately 60 million Christians in China. If the current rate of growth were to hold until 2030, there would be more Christians in China—about 295 million—than in any other nation on earth. This has significant implications, not just for China but for the greater world order. It is probable that Chinese Christianity will splinter into denominations, likely leading to the same kinds of political, social, and economic ramifications seen in the West today.

Whether you’re new to studying Christianity in China, or whether this has been your area of interest for years, A Star in the East provides a reliable, thought-provoking, and engaging account of the resilience of the Christian faith in China and the implications it has for the future.
AUTHOR BIOGRAPHY
Rodney Stark is the Distinguished Professor of the Social Sciences and Co-Director of the Institute for Studies of Religion at Baylor University and Honorary Professor of Sociology at Peking University in Beijing. He is the author or co-author of 36 books in 17 different languages, including the best-selling The Rise of Christianity (HarperSanFrancisco, 1997).

Xiuhua Wang received her BA and MA from Renmin University of China in Beijing and is now working towards her Ph.D. in sociology at Baylor University. She has published several papers in American scholarly journals and at present is exploring the role of gender in conversions to Christianity in China.
TABLE OF CONTENTS